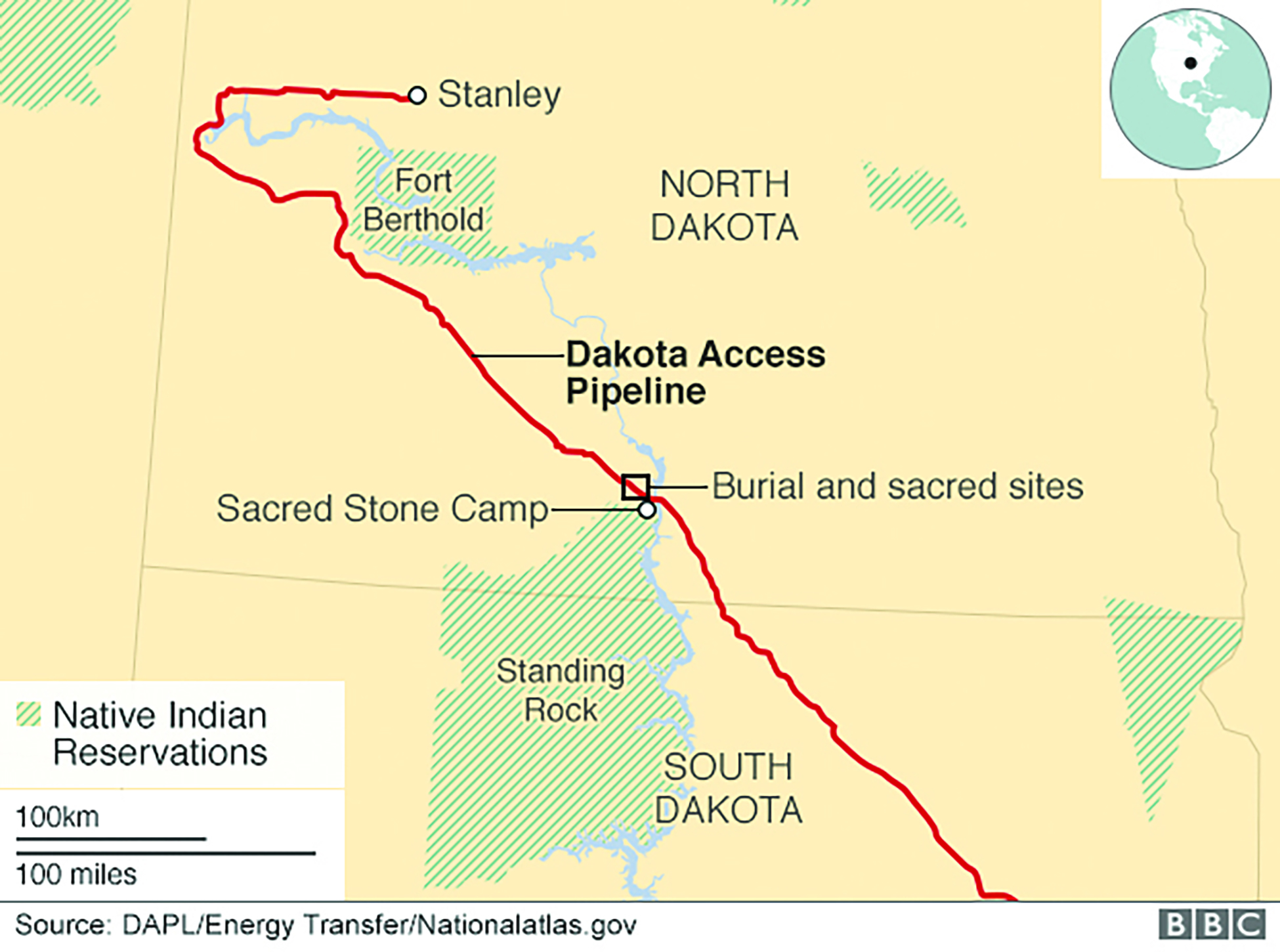 Brought to you by Energy Transfer Partners and the 17 banks funding their operation at a measly 3.8 billion dollars

The pipeline is quite the scary endeavor to witness. With it spanning hundreds of waterways and four states, it’s quite sickening to see so much media silence, almost as if it is being swept under the rug. The Natives at Standing Rock claim they had no idea it was taking place until they happened to see construction taking place before their eyes. I realize we are a vast country that lives and breathes petroleum. So many things require the use of oil. But where does it end? We know how bad it is for the environment yet we continue to harvest this “life blood” of the Earth for our own use, despite so many new technologies that could replace our need for it. I’m not expecting an overnight change, but steps must at some point be taken in a positive direction to change the way we’ve been doing things for the last century.

Regardless of your view on the DAPL (Dakota Access Pipeline) or what you have heard, it boils down to environment and water protection. Do we finish and construct a pipeline that will potentially be harmful to the citizens of the U.S.? If we are willing to risk that, what is the benefit or reward?

The pipeline will cost 3.8 billion dollars, span 4 states and 50 counties at a length of nearly 1,200 miles. Its purpose is obviously to transport crude oil at about 500,000 gallons per day and is arguably better and safer than railcar or other means of shipment. It is owned by ETP (Energy Transfer Partners) and investors Enbridge Energy and Marathon Petroleum. Also invested are the 17 banks that are supporting the project: Wells Fargo, BNP Paribas, SunTrust, Bank of Tokyo-Mitsubishi, Mizuho Bank, Citibank, TD Securities, Credit Agricole, Intesa SanPaolo, ING bank, Natixis, BayernLB, BBVA Securities, DBN Capital, ICBC London, SMBC Nikko Securities, and Societe Generale.

The pipeline was suspended by the Army Corps of Engineers for further analysis of environmental impact but just days after the inauguration, President Trump signed memorandums to proceed with DAPL and Keystone XL as long as American steel is used.

The pipeline benefits oil companies, share holders, and the local government. Projecting the creation of 8,000-12,000 construction jobs, (only some 100 permanent positions upon completion), the pipeline will bring in an estimated 55 million in property taxes. They also claim farmers will see a benefit; the costs of supplies and grain could go down and shipping would increase..

“Instead of pushing bogus job creation claims about the pipeline, Trump should focus his efforts to clean energy where America’s future lives.”
– Greenpeace director Annie Leonard

Another shocking element is how little is seen or heard on media outlets about the pipeline protests. More than 200 tribes pledged support for the protests last year, which was the largest gathering in decades.

Oceti Sakowin Camp has been home to an estimate of 4,000 protestors including Shailene Woodley, Mark Ruffalo, Jill Stein, Bernie Sanders, and hundreds of military vets arriving in support of the cause. There have been many protester incidents, with each side blaming the other. The police claim protesters are starting fires and throwing petrol bombs. The protesters say the police are willfully using excessive force like dousing crowds with pepper spray and freezing water, using sound cannons, bean bags and rubber bullets. Hundreds of protesters and journalists have been arrested, as of Dec. 19th more than 500 protesters and journalists have been arrested; most charged with criminal trespass, rioting, obstruction, and more.

Protesters were also held in chain link cages that both sides refer to as “dog kennels.”

I urge you to pull up the New York Times article, “Conflicts along 1,172 miles of the Dakota Access Pipeline.” It includes the best geographical display of where the pipeline intends to run throughout the four states which is shocking and chilling to see. The pipeline travels across hundreds of waterways and 22 have to be drilled under large bodies of water. A proposed alternate route was declined due to the close proximity of supply water. Lake Oahe is a large protest site due to the Missouri River being a primary drinking water source for the Tribe. There will also be destruction of sacred tribal sites. Every sacred site may not be in reservation territory but the land once belonged to the tribes and has been taken little by little over time.. The pipeline grew two miles at the James River when it was rerouted to avoid three other bodies of water. The Yankton Sioux Tribe is pursuing a lawsuit against Army Corps of Engineers challenging the authorization of pipeline construction.

Iowa Utilities board granted 200 parcels of land for pipeline use under eminent domain; 17 parcels are filing a lawsuit. Protest camps have been set up all over the pipeline areas notably Mississippi, Des Moines, and Lake Oahe at Standing Rock. The pipeline ends in Patoka, Illinois where the oil is to be transported by train via an existing pipeline. Dave Archambault, Chair of the Standing Rock Sioux Tribe, has asked protesters to be gone by February 18th for their own safety and well-being; the fight is in D.C. now. He also warns that many more attacks on the environment and human rights are on the way so we now have to go make noise where we can be heard.

In 2010, a single pipeline spill poured 1,000,000 gallons of toxic bitumen crude oil into the Kalamazoo River in Michigan. The cleanup cost was over one billion dollars and significant contamination remains.

It leaked 180,000 gallons into Ash Coulee Creek. Since 2010, data from Pipeline and Hazardous Materials Safety Administration have reported about 200 oil spills per year. The 180,000-gallon leak is the largest in North Dakota since 2013, but the same company had another spill of 30,000 gallons in Montana. At one point, tests showed traces of oil in drinking water. Claiming it is safer to pipeline than transport is like comparing our modern vehicles to those 50 years ago. Yeah we have the comfort and safety perks such as airbags, but if you are the one behind the wheel it seems no safer than before. The recent spill of 180,000 gallons was not detected by workers or equipment but by a local landowner.

A variety of property rights are subject to eminent domain, such as air, water, and land rights.

The Keystone XL is a 1200-mile pipeline from Alberta to Steele City Kansas to join an existing pipeline. This mirrors pipeline that is currently in place but offers a slightly more direct route. Finance and construction are shared between TransCanada and shippers in the US. The EPA advised Obama to not approve this pipeline addition, stating “it would not lower petrol prices, create longterm jobs, or have affect on our energy dependence.” Alberta would like to double its production by 2030. Because refineries cannot be built in Alberta, they have to ship their crude oil to our refineries at the Gulf of Mexico. Meaning they reap the benefits without having to deal with a pipeline or the horrible emissions from the refinery. The pipelines are held as symbolic of America’s energetic future. First Nation’s group has pursued a lawsuit for damages to Oil Sands Development along with a treaty regarding rights to hunt, fish, and trap on those lands. The crude oil being shipped through the KeyXL is a tar sand oil. The Sierra Club states the bitumen is a mix of clay, sand, water, and oil and is more corrosive than conventional crude. Tar sands oil also requires 17% more emission than conventional to be refined. 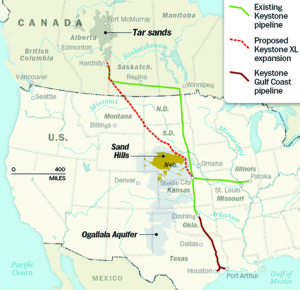 A map of the proposed Keystone XL expansion

From this arises a larger discrepancy for future leaks and faulty connections. North Dakota State Department claims the maximum leak could be 2.8 million gallons through a 1.7 mile area. Corrosion tends to be the number two cause of pipeline failure. The pipeline also runs through the Sandhills area that lies atop the OGALLALA AQUIFER where a large portion of the Midwest gets drinking water. But, but, but, it will generate revenue! Who needs water when you have money?? The pipeline crosses the properties of 850 landowners in Texas, many of them had fought the against it. One of these landowners is Julia Crawford, who repeatedly has fought the access of the pipeline across her property, only to have been silenced with Eminent Domain brought against her. There are already 2.5 million miles of pipeline across our country. What stumps me is if all this effort is put into sending crude down to the Gulf of Mexico, then how much of it is going to go straight off the dock and will never be seen by the US? Leaving us again with no lower petrol benefit, half the monetary benefit, a mound of nasty, putrid waste from the refining process, ALL of the emissions, and ALL the environmental risk. 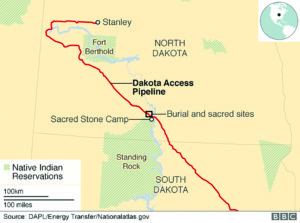